SHOP ONLINE NOW
IN STORE PICK UP OR DELIVERY

We specialize in construction lumber and plywood including all types of wood framing materials, exterior pressure treated and composite lumber, decking and fencing, slope roofing supplies, as well as the gypsum and insulation category.

Builders, renovators, and many DIYers choose Allen Building Centre as their top destination in Oxford County for building supplies and associated hardware.

Check out our video:

Originally known as Dorland Lumber in the late 1950s and early 1960s, we became Allen Lumber in 1963 when William Allen left a store manager position at Beaver Lumber to purchase his own business.

Though he was told he would never make it on his own, over the years the business grew substantially with a well-known reputation for outstanding service, knowledgeable experienced staff, top quality building materials and fair pricing. In 1964, Bill was able to convince his friend and fellow Beaver Lumber store manager, Howard Pursel, to join him as manager of Allen Lumber. Howard brought with him a great deal of knowledge of the industry and a history of successes from the stores he had run previously for Beaver.

The two men combined their efforts to make Allen Lumber one of the most well-known and respected building supply stores in Oxford County throughout the four decades they worked together. An agreement was also forged with Castle Building Centres, a co-operative buying group based in Mississauga, which allowed the store to maintain its independence, yet benefit from the buying power of a large, nationwide group of other independently owned and operated lumberyards.

Around the turn of the millennium, the decision was made to sell the store to Jamie Adams, a step-grandchild of Bill Allen, upon his completion of a degree in Economics and Business at Wilfrid Laurier University in Waterloo. This transition occurred in April of 2002 and so began another era at Allen Lumber.

The past five years have brought many changes to Allen Lumber, including a large scale renovation and re-merchandising that was completed in the summer and fall of 2006. The store tripled in size from its humble beginnings of about 1,200 square feet, adding to and enhancing an already diverse line of hardware and building materials. The yard was reorganized and warehouse racking added to increase operational efficiency, reduce culls, improve cleanliness and organization, as well as to make better use of available space. Building exteriors were painted or resided, and the store was redone using Castle Building Centres sleek new look. To better reflect its noticeably improved line-up of products and ties to the buying group, the store now goes by the name Allen Building Centre.

Though all these changes have taken place to the appearance of Allen Building Centre, the value proposition brought forth by Bill Allen and Howard Pursel in the mid 1960s of Outstanding Service, Expert Staff, and Fair Pricing remains in effect today. In fact, the business was recognized in April of 2006 by the Woodstock District Chamber of Commerce as Outstanding Retailer of the Year, and again in 2012 for Outstanding Commercial Achievement. By keeping up this strong tradition of excellence, Allen Building Centre is positioned to continue its success well into the future. 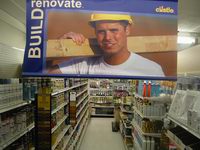 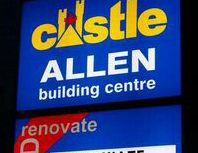 Since 1963, builders, contractors and consumers have been relying on Castle as their building supply partner.  Whether you're looking for lumber, building materials, hardware or advice, hundreds of Castle dealers across Canada are trusted to deliver quality products and value.

Castle dealers are independent.  They run their own stores and businesses.  They know their communities, their customers, and their needs.  That's why Castle members are growing and succeeding across Canada - they live in the communities they serve. At Allen Castle Building Centre, we are your trusted building supply partner.

All trademarks, service marks, logos, graphics, product names and company names are the property of their respective owners.